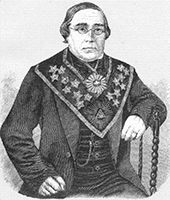 Jean or Jacques – Etienne Marconis de Nègre was a French  freemason. He was born in Montauban of southern France on the 3rd of January, 1795, his parents being Gabriel Mathieu – Marconis and Marthe Nègre. In 1833 he was initiated to the Misraim Rite. According to some sources, in 1838, he revived Lodges of the Rite of Memphis that his father had installed. But it is certain that the Rite of Memphis first appeared in France in 1939, emanating in a great extent from the Scottish and the Misraim Rites. In a lesser –yet vital- extent, it emanated from the “Lodge of the initiates of the Rite of Memphis, Montauban” that his father had installed near the end of the year  1814, the Lodge probably being the heir of the “Filadelfi di Narbona” and of the Grand Lodge of the “Filadelfi of Egypt”. During the years from 1838 to 1840, he installed many lodges in France and in Belgium, most of which were shut down by the police in 1841. The Rite of Memphis was put to sleep until 1848 when it was revived and remained active until the coup of Napoleon III with which the lodges were banned in 1851. Nevertheless, he made the Rite popular in Argentina, Romania, Turkey, England (1850), Italy, Egypt (1856), Australia (1856) and New York (1856). Reginald Gambier Mac Bean, after a series of successions, was initiated into the Rite –in its authentic and traditional form- and it was respectively passed on to Marco Egidio Allegri who unified the Rite in 1945 with the Rite of Misraim to which he was also initiated. Jean or Jacques – Etienne Marconis de Nègre died in 1868.

He is the author of: